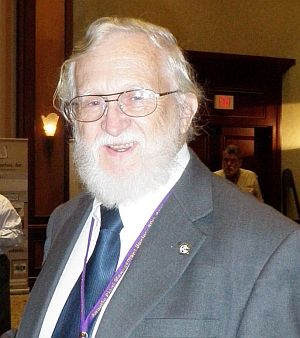 After 48 years of post-doctoral experience, 42 years at the University of South Florida, Dean Martin retired on September 1, 2006.  He was then named Distinguished University Professor of Chemistry Emeritus.  Dean is the author or co-author of over 300 publications and 4 books.

Looking back, he could claim a long-term interest in problems of nuisance aquatic plants.  During high school, he helped his father treat algae in Arbor Lake in Grinnell, Iowa where he grew up, then went to Grinnell College where he met his future wife, Barbara.

After graduating from Grinnell College in 1955, he was a Research Fellow in Chemistry at Penn State and defended his dissertation in 1958.  After experience as a NSF Post-doctoral fellow at University College, University of London, he and Barbara returned to the Midwest where he as a faculty member at Illinois before joining the faculty of USF in 1964.

He and Barbara Martin shared research interests concerned with the coordination chemistry of natural water systems, including problems of red tide and aquatic weeds.  His first paper at an APMS meeting was in 1970, and other papers given by him or by his advisees followed over the years, the last being in 2006.  Sometimes they were joined at the meetings by some of their five sons.

Dean has served as Chair of the Education Committee of APMS, running the Student Paper Contest for several years.  Later, he was a Member of the Board of Directors, a Vice President, President-Elect, and was President in 1986-87.  A number of his advisees have made presentations at APMS meetings, including one multiple-prize winner who is the current Chief Financial Officer of the National Science Foundation.

In addition to a long-term interest in APMS, the Martins have been editors of the Florida Scientist since 1984, and were the first co-recipients of the 1994 Medalist Award of the Florida Academy of Sciences, its highest award.  The Martins celebrated their Golden Wedding Anniversary in December 2006.

The Aquatic Plant Management Society, Inc. is an international organization of scientists, educators, students, commercial pesticide applicators, administrators, and concerned individuals interested in the management and study of aquatic plants.